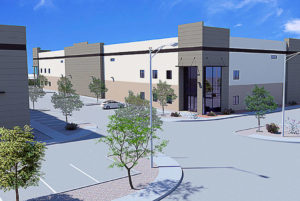 A Las Vegas development group is putting up a warehouse project near the Raiders stadium.

Brass Cap Cos. said construction is underway on its $28 million industrial development at the northwest corner of Edmond Street and Russell Road. The project, dubbed Nevada State Industrial Park, will consist of three buildings that collectively span nearly 200,000 square feet, according to the announcement.

The project site is less than 2 miles west of the Raiders’ 65,000-seat football stadium, which is under construction and slated to open in 2020.

Brass Cap said its project should be finished by June.